Say Hello to the Snail 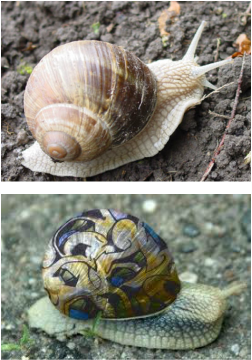 Out there in the damp grass
slithers a greeting from the Middle Ages: Helix pomatia
the subtly gray-gold shining snail with its jaunty house
introduced by some monks who liked escargots*--

… Sister snail
stands almost still in the grass, feelers sucked in
and rolled out, disturbances and hesitation …


How I loved one like you when I was little!--
With his stripes of silver and his small house on his back,
Making a slow journey around the well-curb.
I longed to be like him, and was,
In my way, close cousin
To the dirt, my knees scrubbing
The gravel, my nose wetter than his.


The Mollusks abound, a peaceful tribe. At the bottom, the plump River-snails discretely raise their lid, opening ever so little the shutters of their dwelling … In the glades of the aquatic garden, the Pond-snails—Physa, Limnaei, and Planorbes—take the air.


Besides the familiar garden slugs and snails, gastropods include pond snails, sea snails such as whelks and periwinkles, and sea slugs (nudibranchs). The name "gastropod" comes from the observation that slugs and snails appear to be walking on their stomachs.


… They all have a head and horns and mouth on the tongue-like organ, but in the smaller ones these are difficult to see owing to the animals themselves being so small.

A slimy animal which creeps on plants, some with shells on their backs.

I can tell why a snail has a house.—Why?—Why, to put's head in; not to give it away to his daughters, and leave his horns without a case.—Shakes. King Lear


Unlike cinders (escarbilles), which inhabit warm ashes, snails (escargots) love damp earth.  They go along glued bodily to it. They carry it with them, they eat it, they excrete it. They go through it. It goes through them.


A few phyla*, notably the chaetognaths (arrow worms) and sipunculans (peanut worms), show a remarkable invariance of body plan. One peanut worm looks very much like another. On the other hand, many other phyla show an astonishing range. In the molluscs, for example, the varieties include octopus, garden snail, limpet, and oyster.

*Phyla—Pron. Fi-La. One of the groups biologists divide animals into


Uncontradicting solitude
Supports me on its giant palm;
And like a sea-anemone
Or simple snail, there cautiously
Unfolds, emerges, what I am.


What is nearly always arresting in any ramble through the scattered disciplines of modern science is realizing how many people have been willing to devote lifetimes to the most sumptuously esoteric lines of inquiry. In one of his essays, Stephen Jay Gould notes how a hero of his named Henry Edward Crampton spent fifty years, from 1906 to his death in 1956, quietly studying a genus of land snails in Polynesia called Partula. Over and over, year after year, Crampton measured to the tiniest degree—eight decimal places—the whorls and arcs and gentle curves of numberless Partula, compliling the results into fastidiously detailed tables.


I love at eventide to walk alone
Down narrow lanes o’erhung with dewy thorn
Where, from the long grass underneath, the snail
Jet black creeps out and sprouts his timid horn.


[I] said the word gastropod out loud,
and having no idea what it meant
went upstairs and looked it up
then hid in the woods from my wife and our dog.


A turtle walks into the sheriff's office. "You gotta help me, sheriff," he says. "I've just been attacked by a gang of snails." "Sorry to hear that," says the sheriff. "Now tell me what happened, in detail." "I don't know," says the turtle, "it all happened so fast!"


The classification of gastropod molluscs is in a continuing state of revision and it will be some time before a system comes to be generally agreed for the groups of higher rank (Haszprunar, 1988; Ponder, 1988a). Gastropods have been divided commonly into two major groups, the Streptoneura (including those known as the Prosobranchia or Prosobranchs) and the Euthyneura (pulmonates and opisthobranchs).