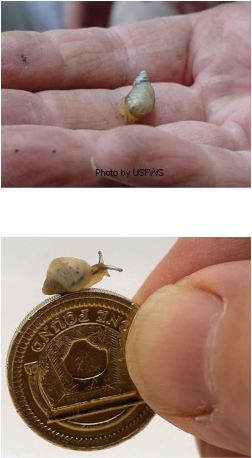 Island endemic species are famously vulnerable. The most timely example is a death on 31 January 1996, when the last specimen of Partula turgia, which was kept in London Zoo, was declared "demised."  This is (I should say was) a tree snail, rather than a beetle, one of more than 100 species endemic to the volcanic Society Islands, near Hawaii, which arose as a response to their remoteness and isolation.


All day long I have been walking among damp fields,
Trying to keep still, listening
To insects that move patiently.
Perhaps they are sampling the fresh dew that gathers slowly
In empty snail shells.


Snail shells, when pierced with a more or less round hole in the manner of an ocarina*, can be played by modifying the size of the aperture so as to obtain a variety of different sounds … This type of aerophone* is still made in Poitou, using the shell of the common garden snail (petit gris).

*Ocarina—A small, round flute
*Aerophone—An instrument played by blowing air through it


The snail crawls over blackness …

His head flies to the end
Of the world,
His body is tossed
Into the ash can.

Could it be that he's the falling snow?


The Phoenicians became proficient in the production of royal purple and in the first millennium B.C. engaged in a brisk trade in dyed fabrics. Wherever the seafaring Phoenicians went they set up dye factories, leaving mounds of mollusk shells to fascinate and inform future archeologists. Their name may even derive from a root meaning of 'purple.'

Scientists have now come up with chemical evidence that people in the late Bronze Age, several hundred years before the Phoenicians, were also busy making the dye out of such mollusks as Murex brandaris and Murex trunculus.  These marine snails are often called whelks.


Snails look so unthreatening to us that it is hard to imagine what a single-minded and scary enemy they can be to a little guy glued in place with just a shell for protection. One of the commonest snails I saw in the tide pools that morning was the carnivorous Atlantic dog whelk, Thais lapillus. It attacks barnacles by secreting a poisonous purple dye (prized by the Phoenicians to color clothing) over them, then inserting its feeding parts into the relaxed plates.


A soft evening sinks through the oriel.
A saint emerges from his black wounds.
Purple snails creep from broken shells


For some reason, snail-like mollusks seem to be almost immune to the effects of insecticides. This has been observed many times. In the general holocaust that followed the spraying of salt marshes in eastern Florida … aquatic snails alone survived. The scene as described was a macabre picture—something that might have been created with a surrealist brush. The snails moved among the bodies of the dead fish and the moribund crabs, devouring the victims of the death rain of poison.


My softness heaves its spiral canopy:
another roof would be too much to bear.
At home I'm sunk, abroad I'm still at sea,
awkward antennae fumble everywhere.

Hermaphrodite the ruttish ocean spewed
up from the ooze, on dry land I endure
a living thirst by day and night renewed,
and know, except slow death, no certain cure


The rosy wolfsnail provides a textbook case of biocontrol gone awry. In 1955, this native of Latin America and the southeastern United States was introduced to Hawaii to prey on the African tree snail, an exotic agricultural pest. This fearsome predator unfortunately prefers native Hawaiian snails, which occur in remarkable diversity; nearly 800 species of nonmarine snails have evolved on these islands. Sometimes gobbling shell and all, the rosy wolfsnail has contributed hugely to the extinction of most of the 15 to 20 endemic species of Achatinella snails, pushing this whole genus onto the federal endangered-species list.


In 1966, a child smuggled three snails into the Miami area as pets. His grandmother later released them into the garden. Seven years later, their population had grown to 18,000. Florida successfully eradicated the snails to the tune of one million dollars over the next decade, but people still insist on keeping them as pets, even though it is illegal. Though fairly frightening, growing up to eight inches long, giant African snails won’t bite, but they are carriers of parasites. This is a special concern if you are ingesting improperly cooked snail meat. Um, what? Why would you want to do that? Well, in one of the more bizarre news items of the year, a man was arrested in Florida for allegedly feeding illegally imported giant African snail to his religious followers.

—US Fish and Wildlife Service


An amazingly complex system of protective measures is resorted to by another mason bee (Osmia bicolor) … First, she has to find an empty snail shell for each of her future offspring.  In the depth of this she deposits some bee-bread, lays her egg on it, and closes the passage with a partition made of chewed-up leaves, taking care to leave enough air space for the growing larvae. Next, she fills nearly all the remaining whorls with small pebbles which she prevents from falling out by making another wall of chewed up leaf pulp. Finally she makes a series of flights to collect all kinds of dry stalks, blades of grass, thin twiglets, or even pine needles where available. From this material, she builds a tent-shaped roof over the snail shell which eventually hides it completely.


I find the winter
inside a snail shell, rigid and
cool, a little stubborn temple,
it's one visitor gone.


A very small commensal colonial hydroid (Hydractinia echinata) is commonly called snail fur because it lives on snail shells inhabited by hermit crabs. It is also found on rocks. The hydroid camouflages the hermit crab and, in return, receives a free ride and bits of food from the crab's meal.


In early autumn
when the brief age of the snails
is at last here
they take themselves out along the roads.

They stretch out their feelers
to see
where death has his hut.


A fluke called Leucochloridium paradoxum makes snails its first host, but makes insect-eating birds its final host, even though the birds have no appetite for snails. The flukes get the bird's attention by pushing their way into the eye tentacles of the snail. Covered in brown or green stripes, the parasites are visible through the transparent tentacles, and to a bird they look like caterpillars. A bird attacks the snail and ends up with nothing but a bellyful of parasites.


So when the snail is burnt in his shell
With the heated fragment, brand me
Deeply on the breast. You must know him
When Abiku calls again.


… [O]verfishing in Lake Malawi has caused a human health disaster along the shores of this apparently pristine lake. When I began diving in Lake Malawi in 1977, its open waters were free of the human disease schistosomiasis. This parasitic disease, which is caused by trematode worms of the genus Schistosoma, occurs in 74 countries and is ranked second to malaria as a cause of human death by a parasite. Snail-eating cichlids ate the snails that are vectors for spreading schistosomiasis. Now each time we enter its waters we take a chance of contracting this parasite that causes lesions and damage in the digestive tract. By removing snail-feeding fishes the incidence of schistosomiasis among school children age five to 15 years has gone from 36 percent in 1982 to 83 percent in the Cape Maclear region in 1995.


In The Mating Mind, the psychologist Georffrey Miller argues that the impulse to create art is a mating tactic … Nature even gives us a precedent, the bowerbirds of Australia and New Guinea. The males construct elaborate nests and fastidiously* decorate them with colorful objects such as orchids, snail shells, berries, and bark. Some literally paint their bowers with regurgitated fruit residue using leaves or bark as a brush. The females appraise the bowers and mate with the creators of the most symmetrical and well-ornamented ones.


… the snails are again appearing in the grass
and on their silent backs carrying away
part of my life too
while the uneaten apples return to the ground.