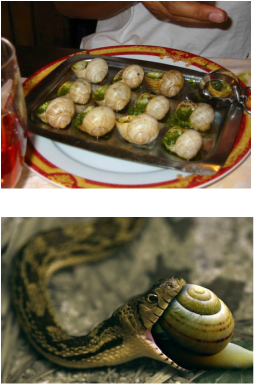 The Romans, who were addicted to snails, grew them on ranches where they were fed special foods like bay, wine, and spicy soups to preseason them.


These also shall be unclean unto you among the creeping things that creep upon the earth; the weasel, and the mouse, and the tortoise after his kind,
And the ferret, and the chameleon, and the lizard, and the snail, and the mole.


The edible snails of France are unlike the bivalves in that they do not live in or near water, but on land, where they dine upon grape leaves and other greens in the vineyards of Southern France. Could it be they are wine-flavored?

Throughout the summer the snails gorge themselves, then in a stuffed and lazy condition they hibernate during winter. After the grape harvest snails are searched for and gathered in their dormant stage and either eaten fresh (in France) or canned for year round enjoyment. The job of cleaning snails is tedious and long.


"I am looking for snails," she muttered. "I hope this doesn't bother you." I looked down and saw the torn old burlap bag in which she was carrying the snails she had gathered. Of course, the rain! Snails always appeared in numbers after it rained, clinging to the underside of the plants' leaves.


I am not a vegan (I will eat eggs and dairy), because eggs and milk can be coaxed from animals without hurting or killing them—or at least so I thought. I am also willing to eat animals without faces, such as mollusks, on the theory that they are not sufficiently sentient to suffer.


To Prepare Snails—Select snails which are closed and with a knife remove the calcerous* membrane covering the opening of the shell. Wash the snails well in a few changes of water and then place them in a container with coarse salt, some vinegar and a pinch of flour. Allow them to disgorge themselves for approximately 2 hours then rewash well in plenty of cold water so as to remove all traces of mucous.  Cover with water and simmer for 5-6 minutes.


The second [dish] arrived in a flower pot, filled with malted, roasted rye crumbs and holding shoots of raw wild vegetables, a tiny poached mousse of snail nestling in a flower, and a flatbread "branch" that was spiced with powdered oak shoots, birch, and juniper.


[The snail kite] will sometimes capture a small turtle or other creature, but their slow flight, slender talons and sickle-shaped bills—which fit perfectly inside the shell of a snail—are adapted to catching and eating this one particular prey. In fact, an adult kite will eat as many as 50 apple snails a day. After plucking one from the water and settling onto a perch, a kite can use its sharp-tipped bill to extract the snail and devour it in less than 90 seconds.


Molluscs, from the viewpoint of a human predator, are small packages of meat sealed in heavy inedible shells. In terms of energy efficiency, this fact sets definite limits on the distance live molluscs will be transported in quantity with simple technologies; beyond these limits, energy expended in transport will exceed that gained from the food.


Snail are relatively easy to cultivate. The escargots de Bourgogne, the variety most esteemed in recent times, are bred in escargotières and carefully fed on choice herbs and milky porridge. They are an efficient food, self-packaged in a shell which serves at table as a receptacle for the garlic butter with which the dish is usually sauced. The waste is small, the nutrition excellent.


Contemporary Westerners tend to associate insects with filth, death, and decay, and, because some insects feed on flesh, their consumption is often seen as cannibalism by proxy. [Vincent M.] Holt takes pains to stress that the insects he recommends for eating—caterpillars, grasshoppers, slugs—are pure of this taint.

Clean the snails with a sponge and remove the membranes so that they can come out of their shells. Put in a vessel with half the milk and salt for 1 day, then in a fresh vessel with the remaining milk for 1 more day, cleaning away the excrement every hour. When the snails are fattened to the point that they cannot return to their shells, fry them in oil. Serve with a dressing of anchovy essence and wine.


… under the canvas
of a Venetian café, the snails converse
about eternity.


In addition to being eaten, snails have also in the past figured importantly in trade. Snail shells have provided the “money” of various races, including the “wampum” of American Indians.


Many kinds of living animals graze algae; some kinds of snails specialize in rasping at algae with their spiky jaws. You can see such small snails sliding over rocks and glass in fish tanks, polishing away the algae and bacteria they feed upon, incessantly clearing away their food, much as an obsessively house proud individual might run over and over a small flat looking for specks and crumbs.


Fate and my parents shaped me like a snail,
day and night wandering marsh weeds that smell foul.

Kind sir, if you want me, open my door.
But please don't poke up into my tail.


But then, there came the she-crab named Railroad Tie. The biggest, most awesome specimen of Carpillus maculatus in Vermeij's collection was nicknamed for the heavy log needed to bar the lid of her aquarium against her escape. Railroad Tie had never met a snail she couldn't break. In the marquee event of [Geerat] Vermeij's Coliseum, the unstoppable offense of railroad Tie was pitted against the drum-tight defense of Drupa morum. On meeting the impenetrable mollusk, the big crab with her extraordinary right claw by-passed the customary perimeter assaults on the snail's rim. Her claw enveloped the entire shell of Drupa. She started squeezing with a force of some twelve hundred pounds of pressure.


Founded by Carlo Petrini in Orvieto, Italy, in 1986, Slow Food (alimento lento) is the long overdue response to dead food, processed food, fast food, agribusiness, Unilever, Nestle, and General Foods … The logo for the movement is the snail, an “amulet of exasperation.”


If snails come across a carcass, they tend to wait until the other scavengers have had their fill of flesh and then nibble at any exposed bones. It is as if they instinctively know that the calcium that the bones contain will be good for their shells.”


Even shellfish were overexploited [on Easter Island], so that people ended up eating fewer of the esteemed large cowries and more of the second-choice smaller black snails, and the sizes of both cowry and snail shells in the middens decreased with time because of the preferential over-harvesting of larger individuals.


Meanwhile, as the size of the catch has fallen, so, too, has the size of the creatures being caught. This phenomenon, which has become known as "fishing down the food web," was first identified by Daniel Pauly, a fisheries biologist at the University of British Columbia … Pauly follows this trend to its logical—or, if you prefer, illogical—conclusion. Eventually, all that will be left in the oceans are organisms that people won't, or can't, consume, like sea slugs and toxic algae.


At the back was the moat in which Roger Deakin* bathed most days during the summer months, and which was kept clean by a colony of thousands of ramshorn snails—the hygenists of the pond world.