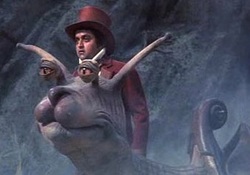 Four and twenty tailors went to kill a snail;
The best man among them durst not touch her tail,
She put out her horns like a little Kylie cow.
Run, tailors, run, or she'll kill you e'en now.


We can count on the shells of cockles and snails the number of months and years of their lives just as one can on the horns of bulls.


This mollusk, best known in popular speech for its slow rate of movement (a "snail's pace"), is of symbolic importance for its harmonically formed spiral shell. Because the escargot seals itself inside the shell with a "lid" that it subsequently knocks off to re-emerge after winter or drought are past, snails came to symbolize the resurrection of Christ. The fact that they carry about their own "houses," moreover, made them allegorical figures of self-sufficiency: the snail is the creature that has all its "belongings" with it at every moment. Hildegard of Bingen explored the medicinal properties of substances extracted from snails (their shells, powdered, were effective against worms; extracts from slugs soothed boils like similar preparations from earthworms.)


If thou wilt forejudge, or conjecture things to come … Take the stone which is called Chelonites. It is of purple, and divers* other colours, and it is found in the head of the Snail.  If any man will bear this stone under his tongue, he shall forejudge, and prophesy of things to come. But notwithstanding, it is said to have this power only on the first day of the month, when the moon is rising and waxing, and again on the twenty-ninth day when the moon is waning.


I expect
nothing from the future. For me
there is only further into my fate
this moist snail-path
under the song of thrushes.


Once upon a time the Sky God's daughter, Asiedua, went hunting snails with friends. Tired and thirsty, they came to a village where lived a lonely old lady. The old lady asked why they had come to her village, and the girls answered they were thirsty after hunting snails. Delighted, she gave them a cup of water, but proud Asiedua did not like the cup. "My father lets me drink from a gold cup," she said, and she smashed the cup on the ground. At this the old lady winked at Asiedua, who died on the spot. Her friends rushed to the Chief of Animals with their tale of snail-hunting and the old lady. The animals made a basket-coffin for Asiedua and placed her in it.  They then made the old lady carry it to the Sky God, Asiedua's father. The defiant old lady told the Sky God the whole story of the thirsty snail-hunters and the petulant Asiedua, but the Sky God took revenge on the old lady by having her killed. He then made a beautiful permanent coffin for Asiedua, which he put under his bed. Whenever he thought of his daughter he would pull out the coffin and take a look at her. Whenever there is lightning that is the Sky God pulling out the coffin, and thunder is the sound it makes on the floor.


A good salve compounded to eliminate black spots from the skin. It is effective, with God's help. It removes them completely and returns the skin to its natural color. It uproots them effectively and it is very useful and strong, with God's help.

The ingredients are pulverized vigorously and kneaded with honey witch which is dissolved in barley water. The dark spots are anointed with it. It may be recalled that Ahmad ibn al-Mu'tasim was treated with it and cured.


Neurex, a small silicon valley biotechnology company, recently designed a pain drug from the venom of the Conus sea snail … The Conus venom was known to kill by blocking specific pathways in the brain which are necessary in order for neurons to fire. With a few alterations, however, Neurex scientists created Ziconotide, a drug which only slightly inhibits those pathways.


The snail, with its spiral shell, linked to phases of the Moon, and the tumescence* of its horns, also stands for fertility. “Thus the snail becomes the scene of a lunar theophany*, as in the ancient religion of Mexico in which the moon god, Tecciztecatl, is shown enclosed in a snail shell.”


A small snail, which frequents the neighbourhood of the limestone hills in the Perak, is believed to suck the blood of cattle through their shadows; hence the beasts grow lean and sometimes die from loss of blood.


imperial inn—
acting like he owns it
a snail


“When resorting to insults, choose your words carefully,” said Silvia Meixner. German law provides for different fines depending on what animal epithet you hurl. If you're in traffic and you call that bicyclist who swerved in front of you a “dumb cow,” you could face a fine of up to 100 euros … if you really can't afford the pleasure of letting one fly at that obnoxious bull cop, pick an animal insult that isn't covered by law: Call him "a snail or a mouse."


As an expression of their capacity to penetrate into every corner (just as the snail withdraws into its shell), Indian wind gods were often represented in the form of snails.


If you ask, the book says something else
beautiful—that when catastrophes waltz

in dark hills, we all sleep brokenly.
When the hero leaves home, his fortune follows
in palm-fitting talismans—-a green stone, a snail shell
and a fly attach themselves almost amorously.


It is on the head and back that the snail stone is found, which is a small pearled and sandy stone, of the nature of lime stones; according to a popular opinion, it cures the tertian ague, if fastened to the patient's arm.