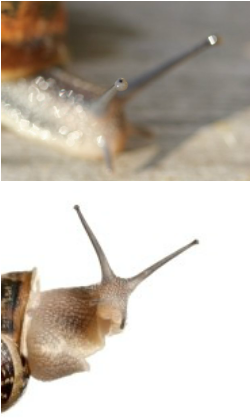 In the same family are water and land snails, that protrude out of their abode and shoot out and draw in two horns as it were. They have no eyes, and consequently explore the way in front of them with their little horns.

And bequeath to me
The wonder-working towel of silver


A snail would look pretty silly if its eyes had the seeing power of human eyes … Snails that grew eyes even slightly larger than the present average might see better than their rivals. But they'd pay the penalty of having to carry a larger burden around, and therefore wouldn't survive so well.


Tiny wanderer of grassblades in peace
with trumpet on back and tall horns
like antennae to east and west
for the blind singer, who,
respectful, always
kisses the earth.


The snail Cochlea testa pellucida was also lying in the water by the shore; the animal was black and had two antennae looking like flat pointed ears.


The snail's covered up
Its eyes with wax, sunk
Its head on its chest
And is staring into itself