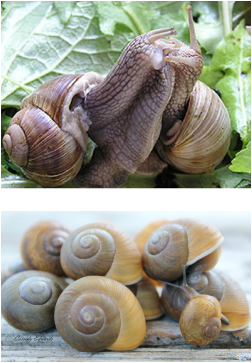 
Snails do not have the complications that human beings have when choosing a partner. As far as the snail is concerned any other snail it meets is eminently eligible, for each snail is an hermaphrodite (both male and female) … The courtship dance is slow and gentle and consists of much pressing together of their feet and caressing each other with their "tentacles"—their eye stalks.


Garden snails, for example, are hermaphrodites. Each has a mashie niblick in the head, and an Edith Sitwell located in an unmentionable place. They also come equipped with their own daggers. This can lead to fatalities.


It is recognized that gastropod molluscs are either gonochoristic or display one of the four types of ambisexuality ... However, there are exceptions. Female Nucella lapillus (L.) may develop a penis-like structure at the end of the breeding season, but a male genital duct or ambisexual gonad is not evident. I find a similar phenomenon in another stenoglossan, the American mud snail Nassarius obsoletus Say ... The phenomenon is tentatively called 'imposex,' since it appears as a superposition of male characters on to unparasitized and parasitized females.


Everything comes from something,
only something comes from nothing,
Lao Tzu says, more or less.
Eminently sensible, I say,
Rubbing this tiny snail shell between my thumb and two fingers,
Delicate as an earring


… the snail produces snail larvae, and these too begin to grow normally, but not for long. While still extremely small, they become entrapped in the tentacles of the medusa and then engulfed within the umbrella-shaped body. At first glance, you'd believe the medusae are now the predators, paying back for earlier humiliations, and the snails the prey. But no. Soon the snails, undigested and insatiable, begin to eat … The thought of these creatures gives me an odd feeling. They do not remind me of anything, really.


Human lips are snails, happy
to be laden with their breathing.


While yet the child sleeps within me
knowing nothing of this earth,
to help me contemplate him
the grass makes his hair,
the date palm his tiny fingernails.
Snails give him a way of hearing
and the red strawberry his tongue


A.-M may not have come across Ariel, but knew that "Where the bee sucks, there sucks I." And brushed her lips with what she call "her honey." Or the nacreous spoor of the snail housed in the recesses of the arbor.


The cochlea bears some resemblance to a common snail-shell; it forms the anterior part of the labyrinth, is conical in form, and placed almost horizontally in front of the vestibule.


My ear betrayed me, my little white sister
glued to the side of my head, a shiny snail
twisted everywhere to catch the slightest
murmur of love


My heart, my dove, my snail, my sail, my
milktooth, shadow, sparrow, fingernail,
flowercat, and blossom-hedge, mandrake


Rather than avoid being inseminated, pulmonate land snails digest the vast majority of sperm received in a specialized gametolytic gland called the bursa copulatrix. A small but variable number of sperm escape to the sperm storage organ. The factors determining how many sperm are stored are unknown. However, one possible influence on sperm storage is a bizarre morphological adaptation named the gyposbellum or "love dart."


You have a face more beautiful than a turnip,
Sweeter than mustard; it appears the snail
Has walked on it, it shine so; like a parsnip
The whiteness of your teeth is, and like treacle
The color of your eyes


Wise emblem of our politic world,
Sage snail, within thine own self curled;
Instruct me softly to make haste,
While these my feet go slowly fast.


The emotional natures of snails, as far as love and affection are concerned, seem to be highly developed, and they show plainly by their actions, when courting, the tenderness they feel for one another.


Banana slugs are most abundant in the morning, when their slime trails glisten on the logs. They seem to disappear by the time the dew has dried. But where do they go? I discovered their hideaway one afternoon when I was looking at the flora of decaying logs. Peeling away a layer of Eurhynchium from a massive log, I exposed what seemed to be a whole dormitory of banana slugs. Lying in individual rooms of spongy wood, each was nestled between the cool moist wood and the blanket of wood. I hastily covered them up, before the sun could catch them sleeping. Slugs give thanks to the mosses.