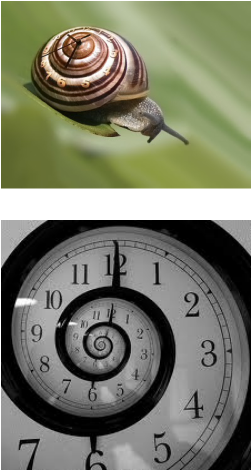 Here's a toast to the snail! …
The spiral stair
Was inspired, certainly, by its shell;
While in matters astronomical
To its horns we owe the telescope as well.
So, long live the snail!
A beneficial animal.


Filippo Brunelleschi (1377-1446) … had built clocks and alarms in his youth. In the process he had also experimented with all kinds of mainsprings … Compared to the drive with weights and rope, a wound-up steel spring has the advantage that it releases its energy in any position and even when in motion. The disadvantage is that the force released is very uneven, viz., with the progressive unwinding of the spring it decreases very rapidly. A clockdrive that was as even as possible thus required not only a steel ribbon—still difficult to make at the time—but also some way of compensating for the decreasing tension of the spring. The solution was the "snail" (fuse wheel), a conical drum with a spiral winding which took up a cord or chain that was fastened to the spring. With this arrangement the decreasing force of the spring is transferred to the fuse wheel with increasing mechanical advantage and the torque is evened out.


The snail is dry in the outhouse
Like a seed in a sunflower.
The owl is pale on the gatepost
Like a clock in its tower.


Following the original Blind Watchmaker program, Blind Snailmaker presents a parent shell in the middle of the computer screen, surrounded by a litter of asexual offspring—its randomly mutated near neighbours in the Museum of All Shells. The human selector clicks the mouse to choose one of the shells for breeding. It glides to the parental position in the centre, and the screen fills up with a litter of its offspring. The process recycles as long as the selector has patience. Slowly, you feel yourself creeping through the Museum of All Possible Shells. Sometimes you are walking amidst familiar shells, of the kind that you could pick up on any beach. At other times you stray outside the bounds of reality, into mathematical spaces where no real shells have ever existed.


When and if we have found and understood the complete irreducible laws of physics … we certainly shall not thereby know the mind of God … We will not even get much help understanding the minds of slugs, which is the current frontier of neuroscience.


A snail
one short horn, one long,
what's on his mind?


The beauty of the machine art in so far as it is a mere by-product of function may seem a meagre and even trivial kind of beauty. But this is not necessarily so. The beauty of all natural objects is also a by-product—the helix of the snail's shell (and a steel coil), the graduated feathering of a bird's wing (and the leaves of a laminated spring), the rabbit's footprints in the snow (and the track of non-skid tires), the elegance of fruit (and of incandescent bulbs).


The cone snail uses a chitinous* tooth to harpoon prey and inject a paralyzing toxin. This compound is an ingredient in Prialt, which is used to relieve severe chronic pain.

* chitinous—made of chitin, a natural hard material that is used by many animals including birds (for beaks) and insects (for skeletons)

Clams and snails represent one of life's greatest success stories, yet only a few specialists have ever heard of Wiwaxia. But who can say that a replay of life's tape would not see the mollusks dive to an early death and wiwaxiids flourish. We know nothing about design or abundance of mollusks and wiwaxiids that would lead our hypothetical Burgess zoologist to specify outcomes without the benefit of hindsight. Wiwaxia was not a fragile rarity in Burgess times. Its sclerites fossilized, and we can therefore trace its abundance and distribution beyond the Burgess. Conway Morris cites six genera of described Cambrian sclerites that might be wiwaxiids. Mollusks, moreover, had not yet proved their success. We know only two genera of tiny clams from the Cambrian, while the larger array of small, twisted, or cap-shaped shells may be snails or monoplacophorans. But we have no definite proof that all are even mollusks.


The great biologist Stephen Jay Gould called it "the most potentially interesting and ethically unacceptable experiment I can imagine." The idea? Mating a human with a chimp. His interest in this monstrosity grew out of his work with snails, closely related species of which can display wide variation in shell architecture. Gould attributed this diversity to a few master genes, which turn on and off the shared genes responsible for constructing the shells. Perhaps, he speculated, the large visible differences between humans and apes were also a factor of developmental timing.


To treat severe pain, a sea snail may hold the answer. Scientists have developed a new medication first isolated from sea snail saliva that may be as effective as morphine. Sea snails may not move fast, but what they lack in speed, they more than make up for in chemicals. These animals have the ability to inject a mixture of toxins called conotoxins into their targeted prey using their needle-like teeth.


The press was not enamoured at the car's launch, one wag of a hack comparing the car to a tin can and asking if the can opener was included. But this did nothing to dampen enthusiasm when the Citroën 2CV became available in 1949. The rest, as they say, is history, with over 30 versions of the Tin Snail being produced in the intervening years.