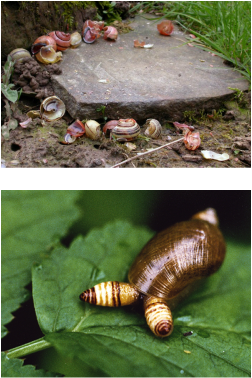 These creatures do most mischief to Wall-trees, especially upon old walls. Pick them off betime in the morning & destroy them. But if you keep the wall well pointed with lime, that they have no harbour there, and the Roots cleane from weeds you'll not much be troubled with them.


In sharp contrast with the benign Partula, African tree snails of the genus Achatina are, in almost all cases, unmitigated disasters. First of all, they are gigantic (as snails go); second, they are voracious herbivores of living plants, including many agriculturally important species. With their clear record of destruction on island after island, I am amazed people still introduce them purposefully … Achatina was imported to the Indo-Pacific realm in 1803 by the governor of Réunion who bought them from Madagascar so that a lady friend could continue to enjoy snail soup. They escaped from his garden and devastated the island. By 1847, they had reached India.


Give but his horns the slightest touch,
His self-collecting power is such
He shrinks into his house with much
Displeasure.

Where'er he dwells, he dwells alone,
Except himself has chattels none,
Well satisfied to be his own
Whole treasure.


The rows of cabbage heads
puff into their chubby selves,
knotting themselves for their purpose early,
closing themselves tightly and firmly
in their own selves against snails.
Tightly bundled up
in the morning's dewily blue-green,
they reach kilo weight and market price.


Lettuce and Succory are absolutely devoured by Snails, some of which are long, and yellow, some blackish, and gray, and others little and white, especially in Rainy Weather.


Seedlings, also, are destroyed in vast numbers by various enemies; for instance, on a piece of ground three feet long and two wide, dug and cleared, and where there could be no choking from other plants, I marked all the seedlings of our native weeds as they came up, and out of 357 no less than 295 were destroyed, chiefly by slugs and insects.


What I do, mostly, is patrol places that have signs of having been nibbled—irregular holes in tender leaves and silvery trails leading up to the plant. I carry a jar of soapy water and simply scoop the critter off a leaf with a spoon and drop it into the jar, telling it I hope it will come back as a butterfly. Mostly slugs and snails emerge in the dark of the night, so going out with a flashlight is very efficient. By day they can often be found close to their feeding ground in a shelter of thick cool growth—mine congregate beneath the catmint.


In the flower garden we have pests enough to vex the patience of any lover of the beautiful, yet they are mostly managed with patience and petroleum. Kerosene emulsion must be always on hand for the grower of roses. The white fly and the slug, which are sure to appear in May and early June, should be promptly met by a thorough sprinkling of weak emulsion and hellebore.


An important predator is the European Song Thrush, Turdus ericetorum, which breaks Cepea and other helicids on stone “anvils,” extracts the snails, and leaves the broken shells.


My snail soul is light sensitive
I lie in the central chamber of the passage grave
Inhaling the stillness of earth
While my daughter daubs slime on her face…
Small, plump, sleek thrush on wall-top with snail in beak
Banging it, cracking me open.
Between each embalming, she goes down to the river;
Returns with her hands glistening with snails.


The placid mollusc tribe—Planorbes, Limnaei, and other Water-snails—were sucking in the air on the surface of the water. The Hydrophilus and her hideous larva, those pirates of the ponds, darted amongst them, wringing a neck or two as they passed. The stupid crowd did not seem even to notice it.


… a magpie clacks into the trees.
A kestrel treads on air. The path is thick
With turfed-out snail-shells, and against a gate

A squirrel hangs as hostage.


This is how things happen: a Snail has been rendered insensible by the Glow-worm …  The matter is obvious: by repeated tiny bites, similar to the tweaks which we saw distributed at the outset, the flesh of the mollusc is converted into a gruel … small details tell us how dexterously the Glow-worm treats his Snail.


Such partnerships abound. Bodies of Plachobranchus, snails, harbor green symbionts* growing in such even rows they appear to have been planted. Giant clams act as living gardens, in which their bodies hold algae toward the light.

* Symbionts—animals that live with another creature helping it to survive


An intelligent designer might have stopped at systematic infection and pulsating, brightly colored tentacles. Not evolution, though. Evolution goes up to 11. The parasite [Leucochloridium] takes control of the snail’s rudimentary brain, making the mollusk forget that it’s scared of daylight and spurring it to inch out into the open. To us the infected tentacles look like a fleshy, Cronenbergian nightmare. To birds they look like delicious caterpillars.


If life mattered to the snail and the snail mattered to me, it meant something in my life mattered, so I kept on ... Snails may seem like tiny, even insignificant things compared to the wars going on around the world or a million other human problems, but they may well outlive our own species.