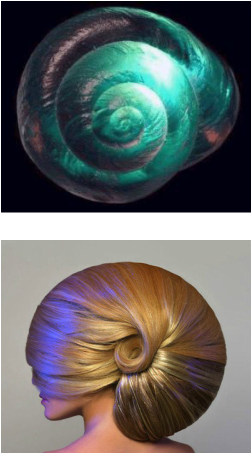 How ingenious an animal is a snail … When it falls in with a bad neighbor, it takes up its house and moves off.


Sometimes I know that God
cares most about the existence of the snail.
He builds her a house.


… if the universe turns hostile,
You can seal yourself silently
Behind your white limestone covering,
Deny the world, and deny yourself to it …
Each path is your highway,
Paved with fine shiny slime,
A bridge from leaf to leaf, and stone to stone.
You navigate with care, secret and sure,
Sound out the way with telescopic eyes


How well does a shell function as a fortress? For a given population, a first approximation to the effectiveness of the shell as armor can be obtained by calculating a simple ratio, the number of repaired breaks in living and "dead" shells divided by the total number of breaks (lethal as well as repaired) in the sample. This estimate may be too low if many of the "lethal" breaks occurred after the death of the original builder. Hermit crabs living in snail shells, for example, are susceptible to the same shell-breaking predators that prey on living snails.


The shell door is known as the operculum and very often it is the most beautifully colored or formed, and it always fits the opening of the shell as snugly and perfectly, and almost as tightly, as the door to a bank vault.


The snail at the edge of the road
inches forward, a trim gray finger
of a fellow in pinstripe suit.
He's burdened by his house
that has to follow
where he goes. Every inch,
he pulls together
all he is,
all he owns,
all he was given.


One of the commonest sorts of movement is withdrawal into cover or shelter. This sort of response to disturbance looks very mechanical at first sight, but simple experiments show that it is not always performed with machine-like regularity. Put some garden snails on a platform, and allow them to emerge and to begin to move about. Now shake the platform or strike it with a mallet and the snails withdraw into their shells. Repeat this at regular intervals of a few seconds, and the withdrawal will probably fade, until finally the snails take no notice.


Still more remarkable is the level of development to which memory has attained in the Snail, if the observation of Mr. Lonsdale is to be accepted of the Helix pomatia, which, after leaving its sickly mate and crawling over a garden wall, returned next day to the place where it had left its mate.


If "compression is the first grace of style,"
you have it. Contractility is a virtue
as modesty is a virtue.


Certain organs of humans and animals manifest an asymmetrical twist, called chirality—narwhal horns and ram horns, snails, seahorses. Chirality usually favors one direction over the other. Snail shells nearly always coil to the right when viewed from above.


… in the smaller view order tight with shape:
blue tiny flowers on a leafless weed: carapace of crab:
snail shell:
pulsations of order


[A]rchaeologist João Zilhão at the University of Bristol in England and his colleagues have found 50,000-year-old jewelry at two caves in southeastern Spain, art dating back 10,000 years before the fossil record reveals evidence of modern humans entering Europe ... In material collected from the Cueva de los Aviones, alongside quartz and flint artifacts were bones from horses, deer, ibex, rabbits and tortoises as well as seashells from edible cockles (Glycymeris insubrica), mussels, limpets and snails; the researchers also discovered two pierced dog-cockleshells painted with traces of red hematite pigment.
—Charles Q. Choi


Though in most species the mature shell is coiled spirally, it does not start that way. During the animal's development, the shell appears first as a little calcerous cap on its back. For in contrast to coral polyps, snails form their calcerous structures on their backs. However, in both coral polyps and snails the production of the hard substance is concentrated in a special part of the skin. The necessary raw material, carbonate of lime, is available to the snail in dissolved form in its food and in water; it is subsequently secreted by the skin in the form of aragonite or calcite.


… I know that there are immense expanses hidden from us,
quartz in slugs,
ooze,
blue waters for a battle,
much silence, many ore-veins
of withdrawals and camphor,
fallen things, medallions, kindnesses,
parachutes, kisses.


The question of why snails have spiral shells has a very different character. It can be asked in several contexts—in the short-term context of biological development, say, or the long-term context of evolution. The main mathematical feature of the development story is the general shape of the spiral.

takes thought. You've always got
to remember he can't tell that's not
wing-weight loading down his foot …
nothing tells him
or me, that the swallow is part of his light
shining from him, from the center of his

spiral, which turns without thinking,
begin. Or end. Or not.


Hard parts, such as the calcium phosphate skeletons of fish, and the calcium carbonate shells of clams, snails, and other mollusks probably began as waste. Calcium ions, abundant in the seas, are poisonous inside cells. The concentration of calcium inside cells must be kept a thousand times lower than in seawater, or the microtubules of mitosis* are halted and growth ceases.

*Mitosis—The splitting of cells to cause growth


In fourth century Athens, the dicasts voted with small bronze discs called psephoi. The word psephos means "pebble," and in the fifth century the dicasts did in fact vote with pebbles. Etymologically, the word ostrakon means "shell of oyster." In the fifth century the Athenians applied the word to potsherds used in an ostracism. The analogy with the development of meaning of the word psephos suggests that the Athenians originally used shells of oysters (or mussels or snails) in some very similar kind of voting of which we have no information at all.


Saddest of all things on the moon is the snail without a shell.
You locate him by his wail, …
He is sad, wet and cold, like a huge tear
In a thin skin.